If you're in the market for a good, basic crockpot chili recipe, this one is it! This chuck roast chili is studded with big pieces of beef, chiles and black beans and comes together super quickly before being slow-cooked for hours. If you have a chili-cookoff coming up, I think you're going to want to tuck this award winning chili in your back pocket for later. 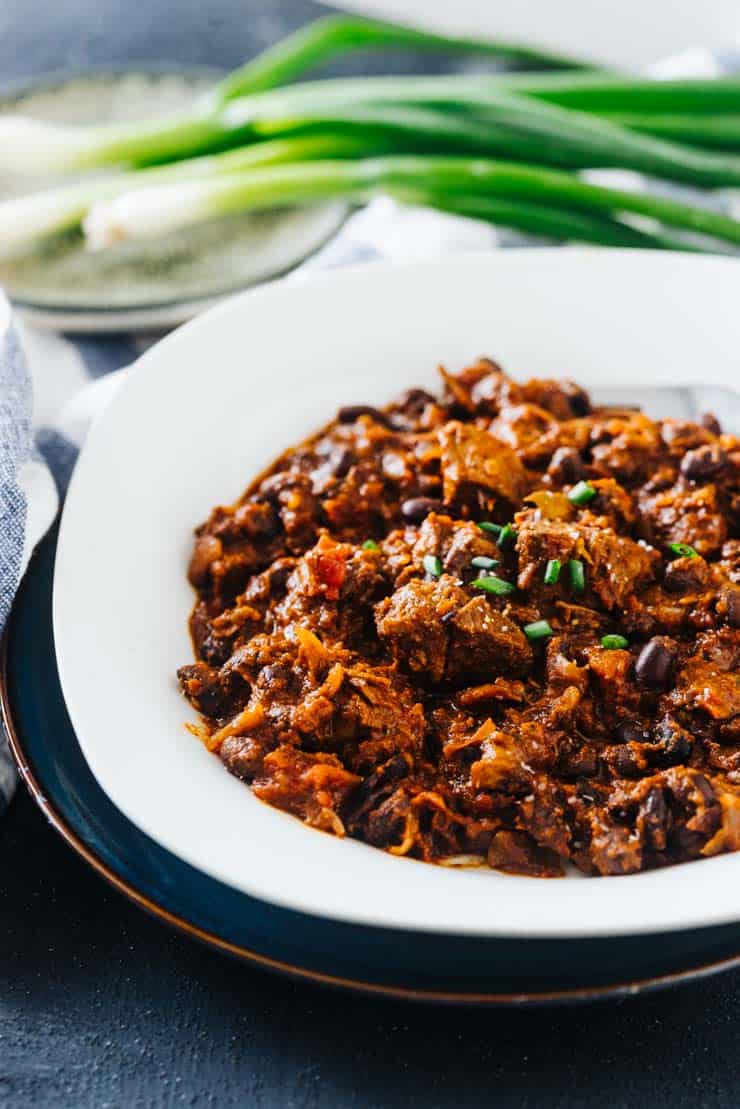 What is it about chili cook-offs and why are they so popular? I mean, we don't have pot roast competitions or scalloped potato cook-offs. Why the heck do we feel the need to show our kitchen prowess in the form of meat and beans and spices?

I mean, chili IS delicious and there are about 25,478 different ways to make it, so I guess that might have something to do with it. But, really, wouldn't you rather your work/church/community sponsor a cinnamon roll bake-off?

Being that chili-cookoffs are so popular, I've thrown my hat into the ring more times than I'd probably like to admit and have won more times that I'd like to admit as well. I've got to stay humble, after all. But, some of my favorite award winning recipes I've used are Instant Pot BBQ Chicken Chili with Pineapple, White Chicken Chili and this Amazing 30 Minute Chili.

Why This Crockpot Chili Recipe is Different

I've used and created a few different recipes over the years, but this crockpot chili recipe is my favorite! It strays just a little bit from a basic chili recipe using two kinds of paprika in addition to chili powder and packs incredible flavor with very little effort. I also use chuck roast instead of ground beef which means big chunks of seasoned tender beef in the finished chili making it phenomenal! 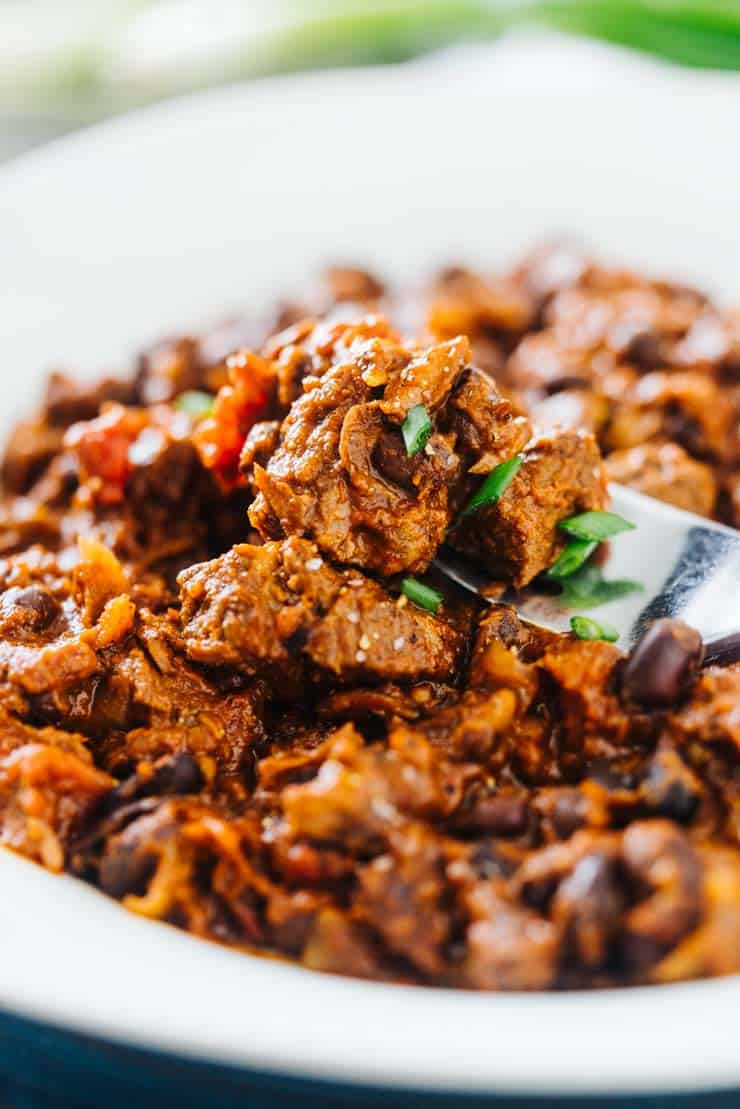 How To Make The BEST Crockpot Chili

I love a good chunky chili with big pieces of meat in it! So, I for-go the ground beef with this recipe and head straight for a beef chuck roast. You could use prepackaged/cut beef stew meat from the meat counter, but for this chili but I much prefer to cut my own.

Typical "stew meat" is made from trimmed bits and pieces of various cuts, with no real uniformity. Cutting your own beef chuck will ensure that you have the meat you want in uniform pieces that will cook evenly.

How to Cut Chuck Roast: First, pull the roast apart at its major seams (where the fat and silverskin is). Then, with a sharp knife, trim off the thick layers of fat and silverskin. From here you can cut the roast into even pieces, ready for your chili. 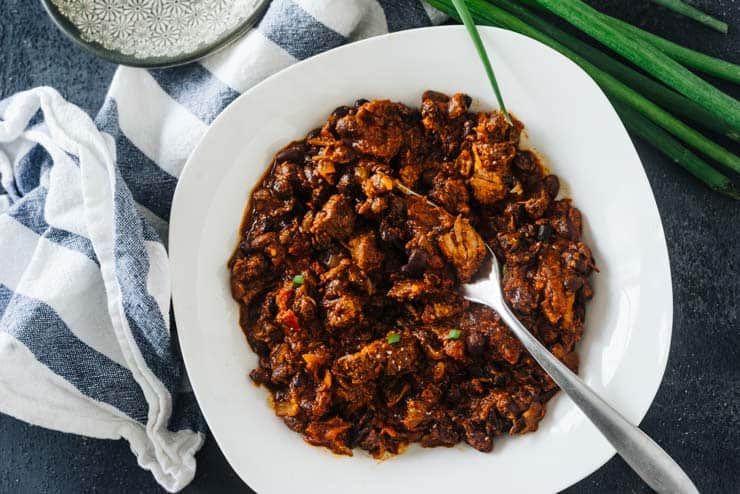 Slow cookers just make everything easier, right? There's nothing better than throwing everything into a pot and forgetting about it until hours later! But, if you're not careful, they can steal flavor that is otherwise present in other cooking methods. To make sure this doesn't happen with your crockpot chili, you'll want to bloom your spices before adding them to the rest of the ingredients.

How To Bloom Spices: Heat a tablespoon of oil in a non-stick skillet over medium-high heat and add the spices to the hot oil. Stir the spices for one minute, until they become very aromatic and then remove from the heat.

This small step will increase the flavor of your chili immensely! Just make sure your oil is not too hot, or the spices will scorch.

Once you have the right meat picked out and cut and your spices bloomed you're ready to cook! You'll add your beef, sugar, oregano, onion, vinegar, garlic, tomatoes, green chilies, beef broth, beans and salt to the slow cooker, followed by your bloomed  spices and stir. Cover and cook for at least 4 hours on high or until the meat is tender, about 6 hours on low. 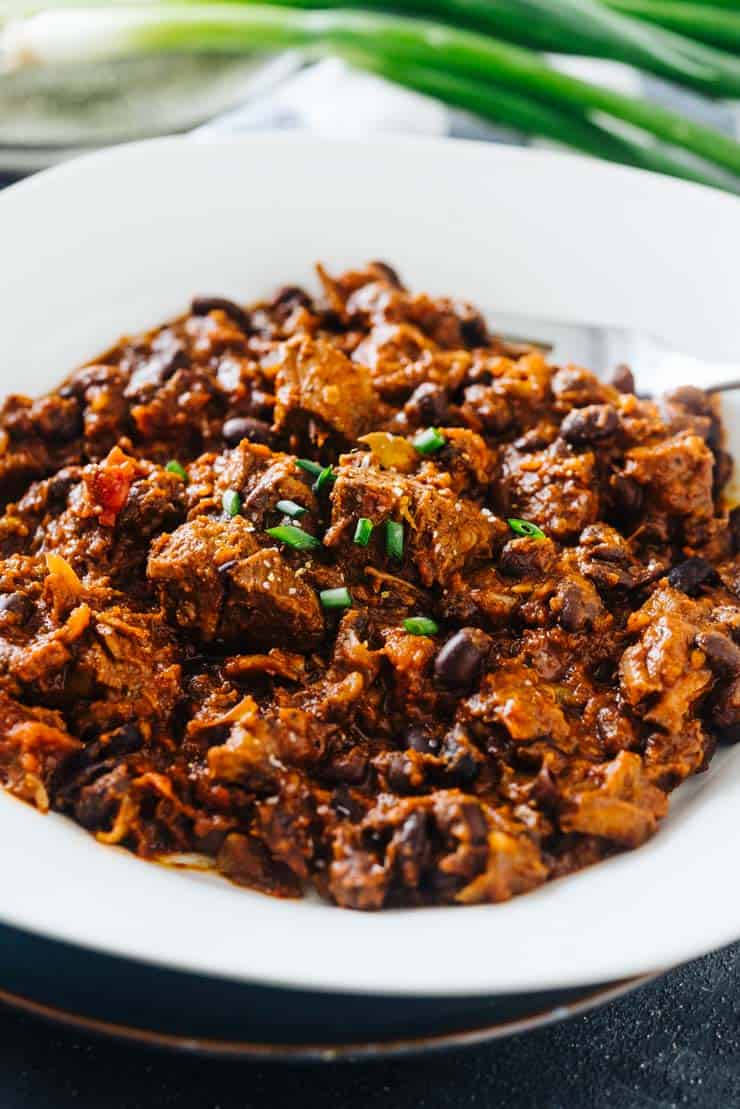 How to Make Crockpot Chili Thicker

Sometimes crockpot chilis can be a little thin because the slow cooker doesn't allow the same kind of evaporation that stovetop or oven cooking does. My recipe is pretty thick on it's own, but if you'd like to thicken it, masa harina is a great thickener for chili.

Masa harina is a the flour used in making tortillas, tamales and other Mexican dishes. It's a flour made from dried masa dough-- a dough made from lime-treated corn.

When using it to thicken chili,  you'll sprinkle a tablespoon or 2 of it over your finished chili and stir, allowing to simmer for about 10 minutes. The masa harina will absorb some of the extra liquid and make your chili thicker. 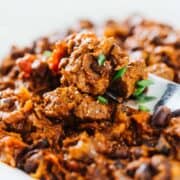 If you’re in the market for a good, basic chili recipe, this one is it! This chuck roast chili is studded with big pieces of beef, chiles and black beans and comes together super quickly before being slow-cooked for hours. If you have a chili-cookoff coming up, I think you’re going to want to tuck this award winning crockpot chili in your back pocket for later.
By Heather Cheney
Print Pin Rate
Prep Time: 10 minutes
Cook Time: 6 hours
Total Time: 6 hours 10 minutes
Servings: 6 servings

Save This Recipe for Later!