Panzanella Salad is hearty and comforting without feeling too heavy. I love to serve it with grilled chicken for a light but satisfying meal! 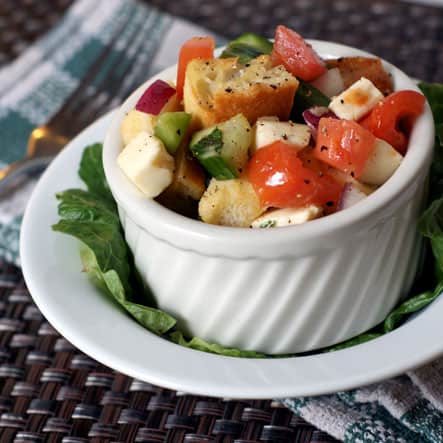 What is Panzanella Salad?

Panzanella is an Italian bread salad that uses day-old, toasted bread and tosses it with tomatoes, cucumbers, bell peppers, cheese, and a simple, yet spectacular dressing. The magic of the salad is really in the bread. It soaks up all the dressing and juices from the veggies and turns into this incredible little piece of soft, crunchy, olive-oily, herby goodness which is great paired with the crisp veggies.

The first time I heard of it I thought,  “Bread salad? Ewww”. But the first bite made me a believer and I hope it does the same for you!

How to Make Panzanella Salad

The first thing you’ll do is start with some fresh veggies and get them chopped up. Tomato, red onion, cucumber (I use English cucumbers because you don’t have to peel them, and they have itty-bitty seeds), basil, and bell pepper. You’ll also cube up some mozzarella cheese and throw it into the mix. You know those marinated mozzarella balls? I bet my sink full of dishes that they would be awesome in this! 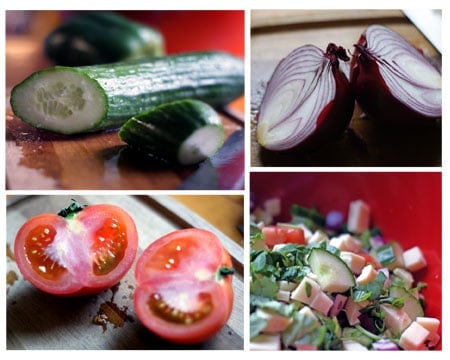 How to Make Garlic Paste

Want to know a little secret for using garlic in salad dressings or any other time you want it minced really fine? Make a garlic paste! Instead of putting the 1/2 tsp of kosher salt that you need directly into the salad dressing, pour in on top of the garlic cloves. Chop it up a bit and then use the tip of your knife while pressing down on it with your palm to smoosh up the garlic. The salt is just abrasive enough to help break it down into a paste. No more biting into big pieces of raw garlic! 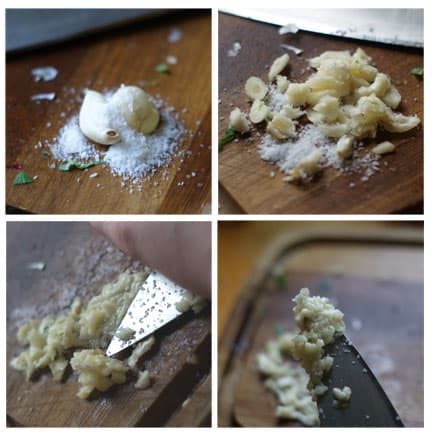 Pour the salad dressing over the veggies and give it a stir. You want the veggies to have a chance to really soak in the flavor of the dressing. I usually make it up at least an hour ahead of when I want to serve it but it can sit in the fridge overnight if you want to make it ahead and have it ready to go for the next day!

What kind of Bread Should I Use For Panzanella Salad?

This is where it gets dangerous for me- The bread. I like to use the French Baguettes from Fred Meyer (best grocery store bread ever, BTW), but any crusty-crusted, fairly firm bread will work well. I don’t like to use breads that are really light and don’t have much girth. They just get soggy in the dressing. Yes, I just used the word girth to describe bread.

Cut the bread into 1″ cubes, place on a baking sheet, sprinkle with salt and drizzle with olive oil. I usually use my hands to toss the bread around a bit to make sure its all coated. At this point I usually snitch a few pieces too.  Olive oil+bread+ salt= love. If there’s any left, pop them in the oven for about 15-20 minutes. They should be golden around the edges- I forgot to snap a picture.

Once the bread is out of the oven and cooled, toss with the veggies and eat to your little heart’s content! Need a killer grilled chicken recipe to serve with this Panzanella Salad? I love this Basic Grilled Chicken and it is my go-to when I need chicken that goes with just about everything. Panzanella would also be great with a nice grilled steak! Check out this tutorial for mastering the art of the perfect steak here: Cooking School: How to Grill the Perfect Steak. 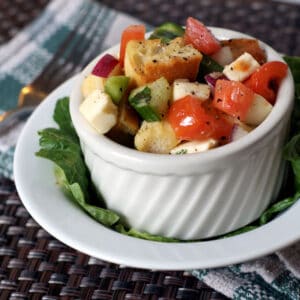