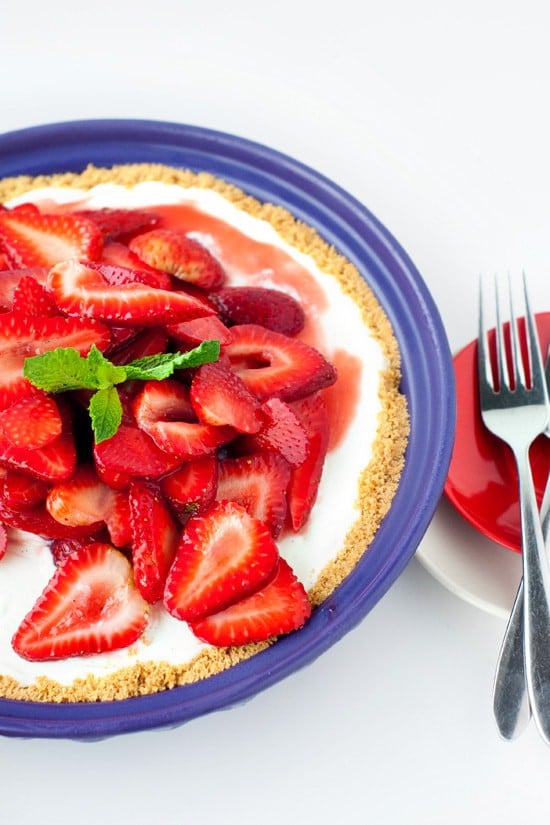 Including my own, I have 9 baby showers to attend over the next few months. NINE! You'd think that we all drank the same punch or something wouldn't you? It's pretty crazy. And so far every single one of these women are having girls except for me.  I'm totally fine with this since I already have 2 girls, but this poor boy is not only going to have 2 sisters, but all of his play-group buddies (my friend's kids) are going to be girls. He's going to be quite the ladies man!

I started my marathon of baby showering and celebrating last week and brought this cheesecake to the party. If you're in the mood for cheesecake but don't want to fiddle with ovens and water baths, this recipe is for you. Sadly when I made this last week I only gave it like 2 hours to chill before slicing into it so it didn't stay pretty for long, but it sure tasted good! If you want it to keep it's shape just make sure to give it a good 4- 24 hours to set up in the fridge before slicing. Let's make it!

I don't have pictures of the crust but it's a simple graham cracker, brown sugar, cinnamon, and melted butter combo. Press it into a pie dish or spring form pan, pop into the fridge for 3o minutes to chill and it's done!

For the filling you'll beat 2, 8 oz packages of softened cream cheese with sugar, lemon juice and some vanilla bean seeds. When you're beating the cream cheese scrape the sides of the bowl down a couple of times to make sure you're getting it all incorporated. If you wait until you add the cream to scrape the bowl you'll end up with chunks of cream cheese in your finished cake. <---- no bueno 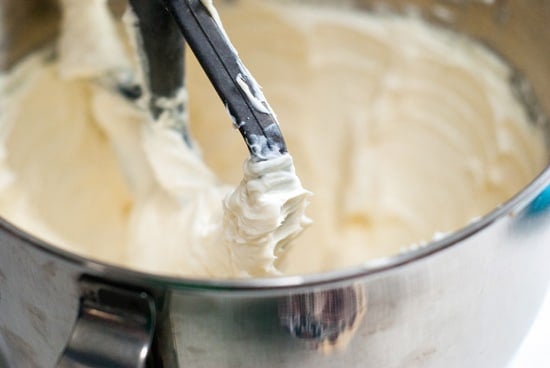 Remember that one time I made my own homemade vanilla extract? I'm using a vanilla bean that has been soaking in vodka for the past 5 months. This looks a little different than just splitting a vanilla bean in half and scraping out the seeds but either way works just as well. 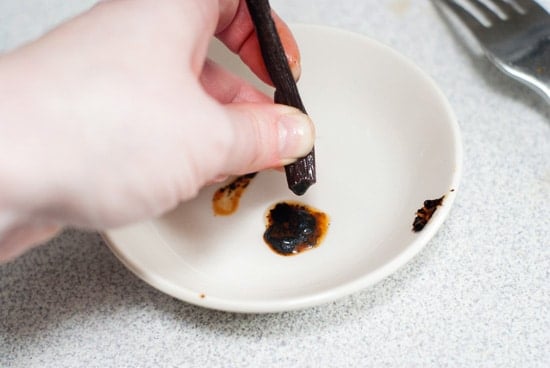 Liquid gold, this stuff is. I luurrrrvve vanilla. 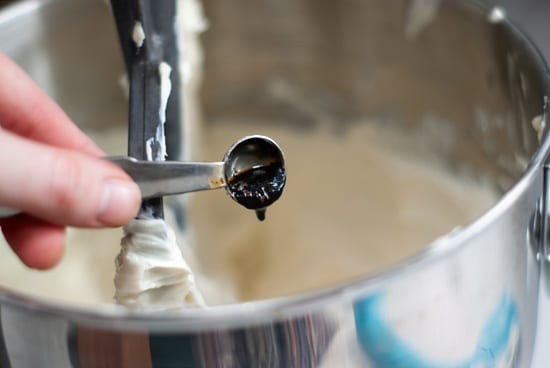 Next up, the cream. First of all, make sure the cream you use says "Heavy Whipping Cream" or "35% fat cream" or something to alert you that you are using the real deal and not glorified half and half. Sometimes cream that just says "whipping cream" doesn't have enough fat in it to keep it stable and let it thicken. Sorry folks, low-fat options just aren't going to work here! 🙂 Second, add the cream in slooooowly. Add some, scrape the bowl. Add some more, scrape the bowl again. Doing this will keep your mixture super smooth and prevent any lumpy-ness. 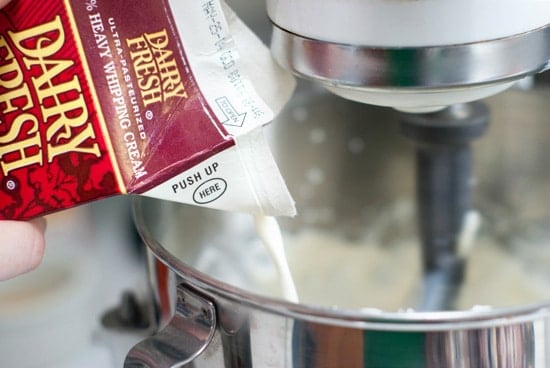 Once all the cream is mixed in you can let the mixer rip and whip until it's thick and still peaks form. 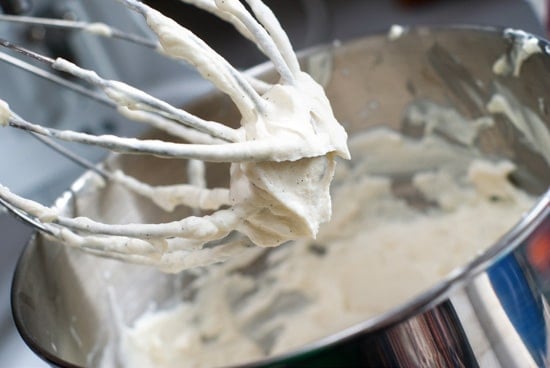 Spoon into the chilled crust, smooth out the top, cover and pop in the fridge for at least 4 hours. 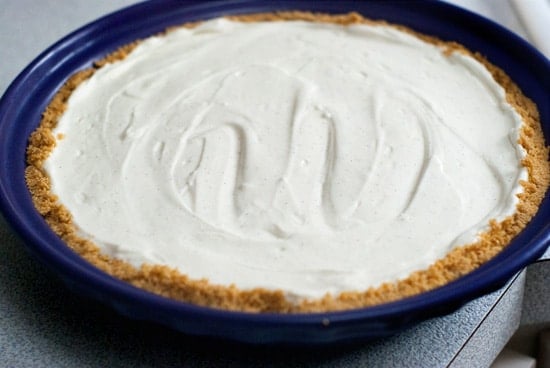 You can really top this cheesecake with whatever you want, but I'm always in the mood for some fresh strawberries. Instead of mixing them with a bit of sugar I like to stir them up with a few tablespoons of strawberry jam to give them a little glaze and sweetness. 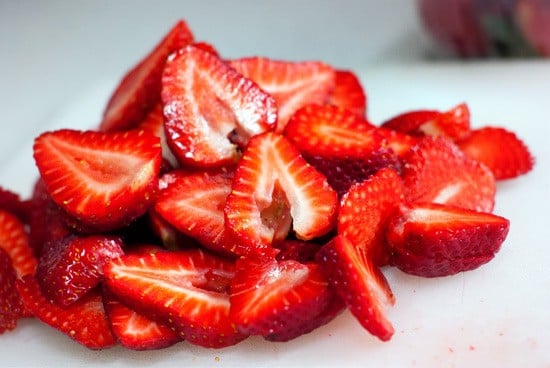 And that's about it. Top, eat, and enjoy! 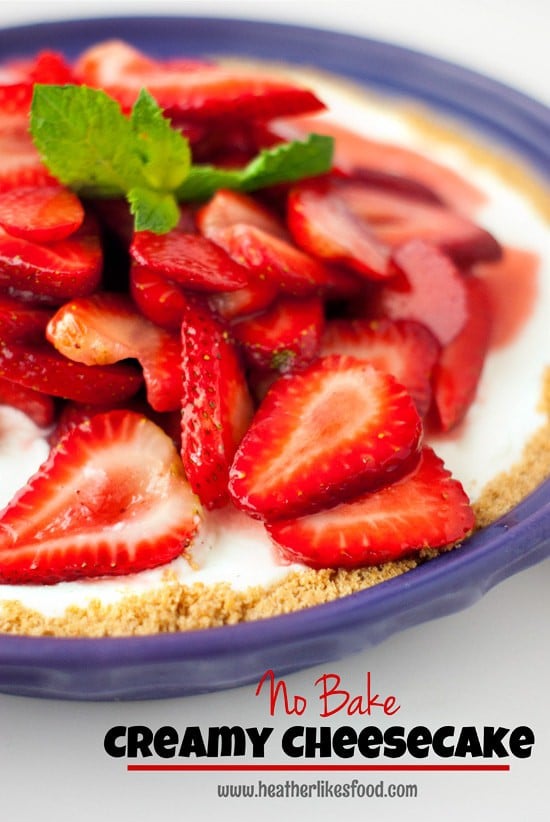 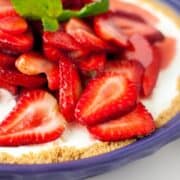 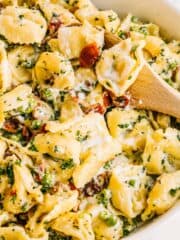 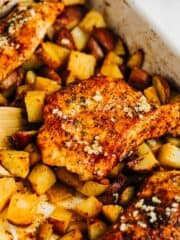 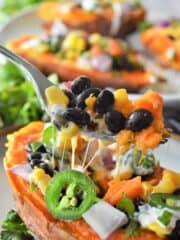 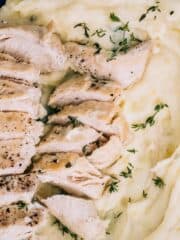