Have you grabbed my new Instant Pot Cookbooks? Get all 5 cookbooks and the meal plan for 40% off today!

TThis Caramel Blondie Brownie recipe gives you chewy blonde brownies that are brimming with caramel flavor. Top it with a divine maple butter sauce and you have one heck of a dessert. 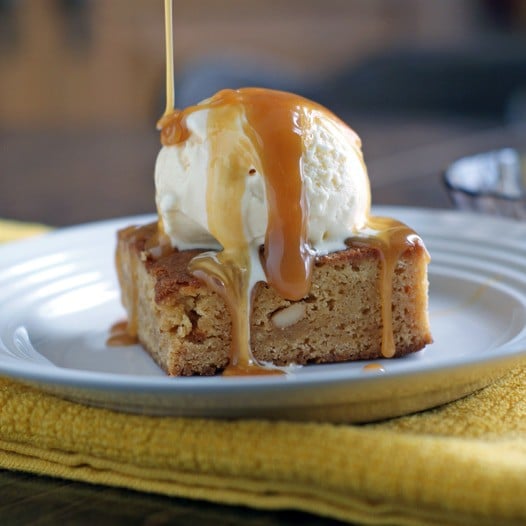 Holy Hannah Montanna, have I got a recipe for you! Seriously, people, you’ve been to Applebee’s, right? Does Maple Butter Blondie ring a bell? Of course it does! Everybody loves a warm caramel-y blondie brownie recipe topped with a luscious maple butter sauce!

If it’s done right – and believe me, I’ve had some that did me wrong- for shame Applebee’s. For shame. – it’s on my list of all time favorite desserts. I’ve tried a few copy cat recipes that have floated around the web but none of them really did it for me. Most blondie brownie recipes I’ve tried taste great but the texture is all wrong — they are either too dense or buttery (did I really just say that?).

Last weekend as I was plowing through some unloved cookbooks trying to find something sweet to make for our Super Bowl feasting, I found this blondie brownie recipe.  I thought it looked good, but it didn’t even register that it might be just what I’ve been looking for- until I tried them.  Am I allowed to say “holy Hannah Montanna“ again?

You’re probably looking at the picture above and thinking  “that doesn’t look anything like Applebee’s dessert!” You’re right, it doesn’t.  Bear with me though. I didn’t know these blondie brownies were going to be so similar to Applebee’s so I didn’t try to make it taste like it. I used cashews instead of white chocolate and walnuts and a jarred caramel sauce as topping instead of the maple butter sauce. Next time -OH YES there will be a next time- I will make these changes and I will have what I’ve been looking for all along! Although I did really like the cashews and caramel sauce too.

What Is A Blondie?

A blondie is, like the name suggests, a blonde brownie. Which basically means it’s a chocolate-less brownie and substitutes vanilla flavoring for cocoa. They typically have brown sugar in them and have deep, rich caramel and vanilla notes. Don’t get them confused with white chocolate brownies though, since they actually have white chocolate in them making them brownies. This blondie brownie recipe makes a true blondie since they don’t have any chocolate mixed into the batter. 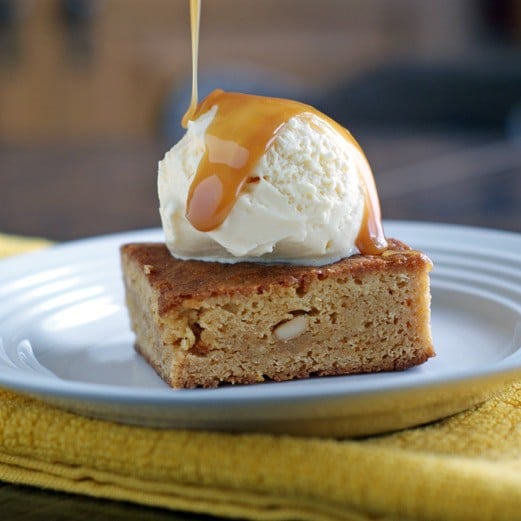 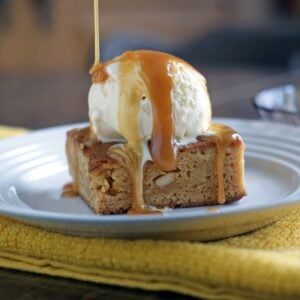 For the Maple Butter Sauce

For the Maple Butter Sauce

I'm creating a new local business and need all the input I can get! Can I bribe you with a copy of my "Family Dinner Favorites" Ebook to take the survey? I'll send it off as soon as I get your response!