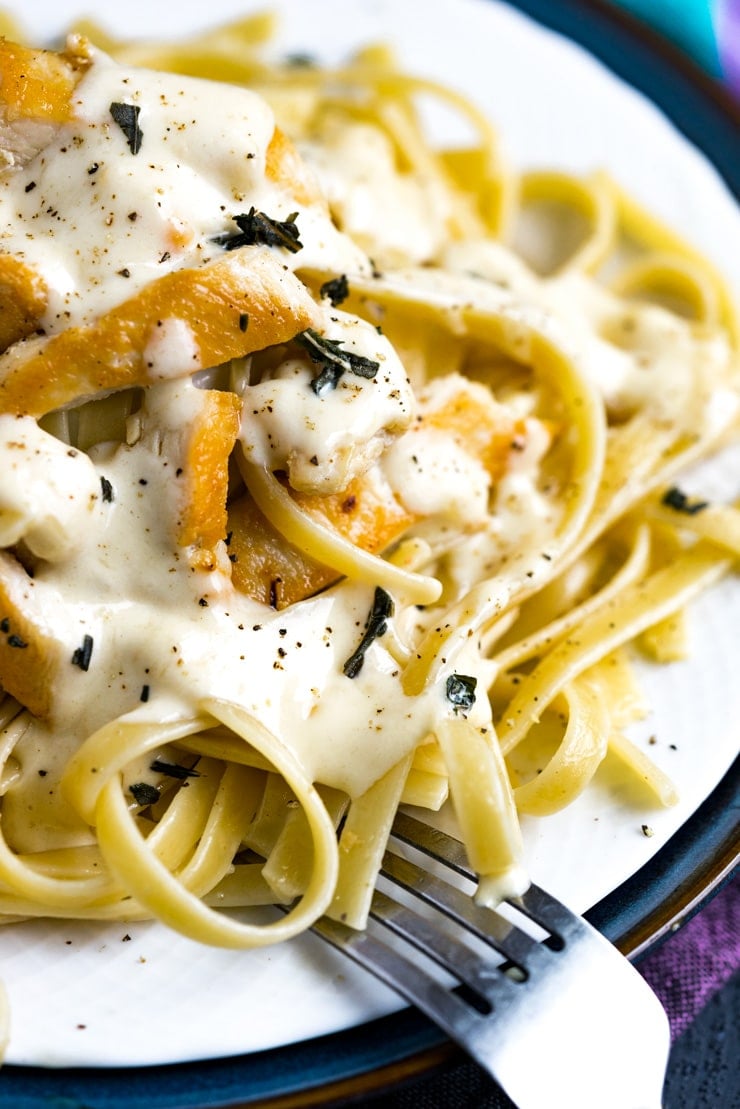 You guys! I’m so excited about this recipe I could hardly wait to get it photographed and written out! I’ve been cooking A LOT with my Instant Pot (see my latest recipe here), and this one is pretty life-changing.

I’ll admit I miiiiight be being a tad bit dramatic about this, but seriously you guys– Chicken Fettuccini Alfredo DONE in under 20 minutes in one pot! I want to give this recipe all the exclamation points right now. 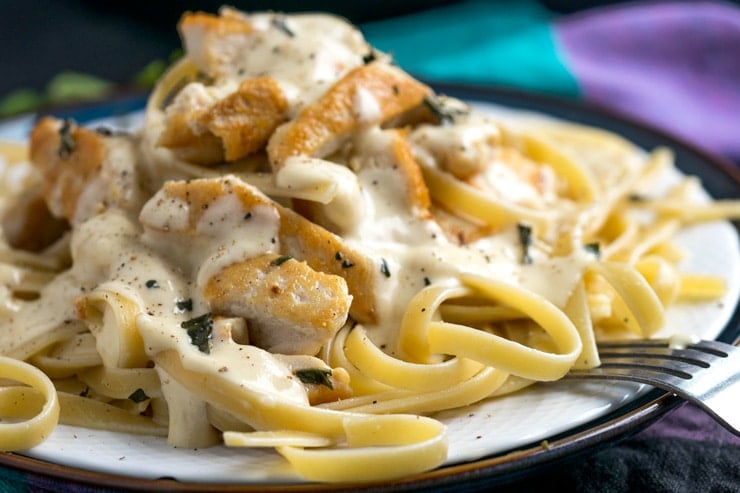 It’s made with real ingredients, too. I’m not dumping in a jarred sauce and covering the lid. We’re talking real cream, butter, and garlic. If I ever got a private concert from Julie Andrews, I’m pretty sure I’d have her sing “Favorite Things” with those three ingredients added to the song. You think she’s too classy to oblige?

Be Sure to Sign Up For My Email! New Recipes Delivered Straight to You! 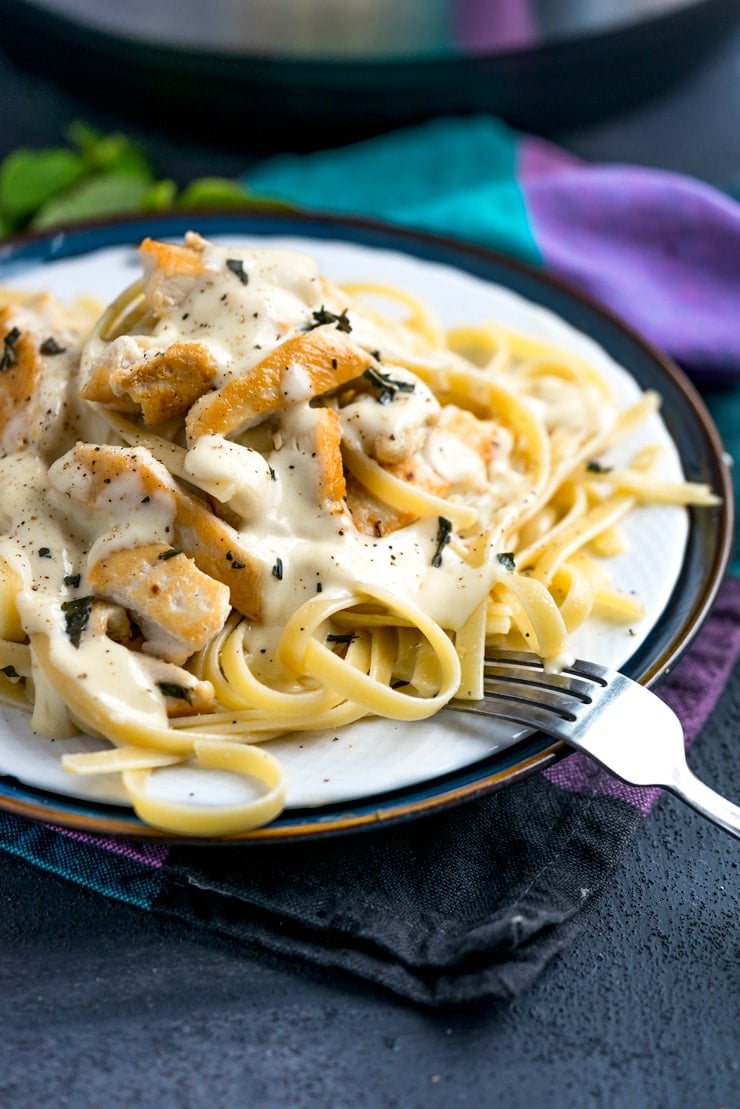 This Instant Pot Chicken Fettuccini Alfredo recipe is pretty self-explanatory, so I’m just going to leave this right here and direct you to the recipe card below and make sure to read the recipe notes if you don’t want a mess in your kitchen. 🙂

If you have an Instant Pot make this like, now. If you don’t, this is the one I have and love. Much love to you all!

I’m still very much learning about cooking with electric pressure cookers, and one thing has become evident to me as I’ve read the comments from those that have tried this recipe: All Electric Pressure Cookers are not made equal! It looks like even those that are the same brand and/or model are cooking this recipe differently.

According to the comments, about 75% of you that have made it had it turn out fabulous (yay!) and the other 25% had problems.

After testing the original recipe again and again in my Instant Pot 6 quart DUO60, I’ve made a few modifications to the recipe card.

The first is that I added an additional 1/2 cup of chicken broth to the recipe. Doing this will leave more liquid for the sauce and hopefully eliminate the “BURN” or “ovHT” notification that some of you are getting. I did a little bit of digging, and this is what I found:

This mechanism is called “burn-protection”. When a high temperature (140C or 284F) is detected at the bottom of the inner pot, the burn-protection mechanism suspends heating to avoid burning food. On Instant Pot IP-DUO series, a warning message “ovHt” is flashed on the display. — Instantpot.com

Apparently, dense foods with a high starch content, like fettuccini, can block the heat from distributing evenly in the pot, causing the sensors in the Instant Pot to suspend cooking, regardless of how much liquid is in the pot. If you are using a pot that is smaller than 6 quarts or using more chicken than is called for (causing the pasta to be weighted down more to rest on the bottom), you might run into this problem.

The second change I made to the recipe is an increase in cooking time by 2 minutes. The additional liquid and increase in cooking time should take care of any undercooked pasta. This said, due to the nature of cooking pasta in an Instant Pot, where the noodles aren’t able to move freely, you will end up with with a few that were not submerged all the way or were stuck together–It’s just part of this cooking method. Every time I’ve made it I’ve ended up with about 95% of my pasta being perfectly cooked. The other 5% is something I’m willing to sacrifice for the sake of how stinkin’ easy this recipe is. 🙂

I appreciate all your comments and am grateful for an opportunity to fine-tune a recipe with your feedback! Please continue to share your experiences with the recipe, and hopefully, we can create the ULTIMATE fettuccini alfredo recipe for the Instant Pot together! 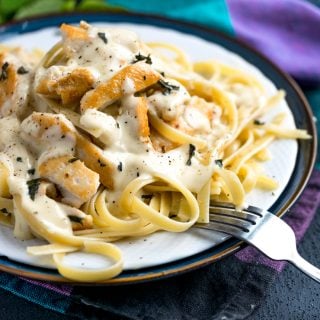 Chicken Fettuccini is a favorite at our house and I'm so excited that I can now make it super quick! Using the Instant Pot cuts the cooking time by more than half and the best part is I only dirty one stinkin' pot. I'm tellin' you this Instant Pot thing is a game changer, especially for this Instant Pot Chicken Fettuccini Alfredo.
By Heather Cheney
Print Pin Rate
Prep Time: 10 minutes
Cook Time: 15 minutes
Pressure Release time: 15 minutes
Servings: 4 servings
Calories: 1272kcal

The first time I made this I tried doing a quick release of pressure after the cooking time was up and I ended up with a literal volcano of cream coming from the spout of my Instant Pot! Ha! So, that's why I recommend you wait for a natural release. Cream has a tendency to boil up when being cooked and comes right up to the top of the pot, making for an easy escape when you release the valve. You may be able to get away with letting it cool for 5 minutes and then try a quick release, but do so knowing you might get a cream bath. 😉
Serving: 1serving | Calories: 1272kcal | Carbohydrates: 86g | Protein: 74g | Fat: 69g | Saturated Fat: 37g | Cholesterol: 431mg | Sodium: 1656mg | Potassium: 1354mg | Fiber: 3g | Sugar: 2g | Vitamin A: 2210IU | Vitamin C: 14.9mg | Calcium: 366mg | Iron: 3.5mg

I’m serious; you want to sign up for my Email! You’ll never miss a dang recipe!